Ten Plus Textiles are having an exhibition at Ordsall Hall in Salford. Some of the members have also been working on a community project with a local youth group to produce "creatures" which may be lurking behind the wattle and daub of the old building. Ordsall Hall is beautiful and well worth a visit. 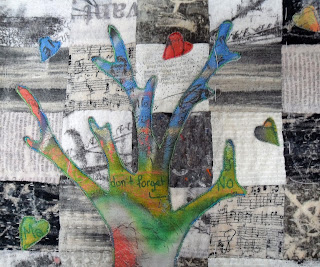 My new work, "Remember", is on display. It combines many elements of my recent work- fabrics printed on the computer, graffiti and applique. The background was pieced, then needlefelted with an embellisher machine to distress it a little. The tree was cut from fabric that I had put through the printer to print an image of graffiti. I liked the idea of  blurring the boundary between a natural element like a tree with something more urban. 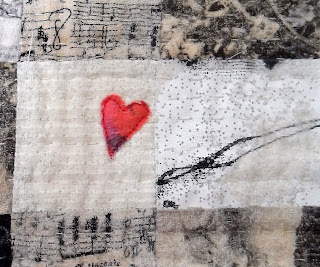 A lovely brisk walk along the canal. Beautiful golden sunshine lifting my spirits and making the dusting of snow on the towpath sparkle. Birds chirping and the dog, off lead, giddy with the joys of Spring, snuffling along the bank and skipping along. That is, until he decided to chase the ducks across the ice.......

Normally, he is wary of the water- he can't swim that well and often barks at dogs swimming in streams to warn them of the danger. But today, the water was solid; it must be -those ducks were walking on it, after all.

He got almost halfway, with me yelling at him to come back and willing him to be feather-light, when the ice gave way. There was a cartoon pause, while he registered that the water was in fact liquid, then he started scrabbling desperately. Did I mention that he can't swim? I was frantic, calling "Alfie come" and his eyes were pleading, but he was getting no closer to me. There was ice in his way. He was too far for me to reach. Very quickly he tired and looked dangerously close to slipping under. He wasn't moving forward, just paddling to keep his head up. I couldn't bear the thought forming in my head. I couldn't stand there shouting, reaching and watching while he drowned. So I waded in.

I know, I know! I've heard those stories too- I've told my own children-"Never go into water after the dog". I figured the canal couldn't be that deep. I was very careful and thankfully, by the time I was in above my knees I could reach out and grab him by his harness. The relief!

We then had a 25 minute walk back to the car- thank God it was sunny. After a good shake Alfie seemed full of beans again, but I kept him very firmly on his lead as I squelched along in my sodden wellies! 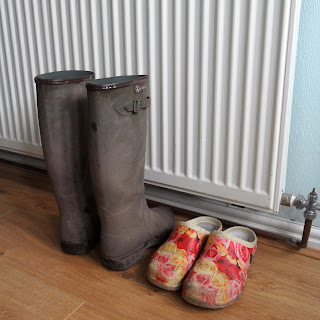 We got home eventually, both had warm showers and now that we have both stopped shivering, Alfie is asleep on the sofa. I think we may be going for a road walk tomorrow :( 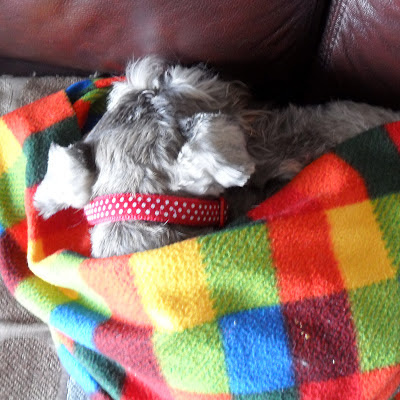 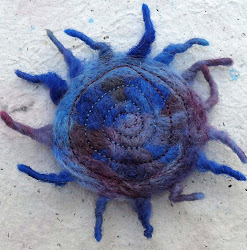